Well, I guess better late than never.  I saw this in the theater yesterday on its last week in our downtown AMC, more of a “Lazy Sunday” situation than anything.  I was always iffy about seeing this movie as I wasn’t the biggest fan of MIB II and after reading the first set of lackluster reviews I found it hard to work up the motivation to shell out spend $11 and a perfectly decent evening on the film.  Now that I’ve seen it however, I’m glad that I did.  Men in Black 3 is a welcome return to form for a long dormant franchise and a more than suitable vehicle for Will Smith’s ended hiatus from the silver screen. 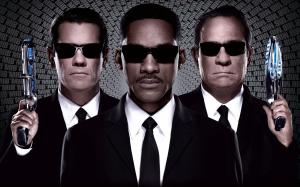 Anyone else craving a reverse Oreo right now?

After a bombastic escape from a high security lunar prison by the one-liner spewing villain Boris the Animal (Jermaine Clement), we are re-introduced to Agents J and K (Will Smith and Tommy Lee Jones) who are still plodding along business-as-usual, now 14 years into their odd couple partnership.  Agent Zed (Rip Torn) is now dead, his place taken by Agent O (Emma Thompson), but other than that it doesn’t really feel like much has changed in the nearly ten years since we last saw the two leads.  In any case, after some tense words with his partner J awakens the next day to a world in which he is the only one with any memory of his tacit partner, with everyone else telling him that K was killed over 40 years ago by Boris.  In order to set history back in order, J must now travel back in time to save his partners life from both the future and past versions of K’s would be murderer.  Upon arriving in the year 1969, J teams up with a younger Agent K (Josh Brolin) to prevent the invasion of Earth by Boris’ species and save K’s life.

The success of the Men in Black films have been built on a variety of strengths but none more so than the chemistry between the  Will Smith and Tommy Lee Jones, with Smith in particular injecting the sort of cocky swagger he perfected during his days so very long ago as the Fresh Prince of Bel-Air.  While he is now in his mid 40s, he still projects the same youthful energy this time around as Agent J as always (not to mention that it looks like he has hardly aged a day since the last film).  Jones is perfectly fine as K but the forced mystery around the origin of his character’s unbroken detachment  doesn’t give him very much room for growth while his era of the character is on screen.  Where K really comes alive is in the return to his “youth”, at which point Mr. Brolin takes the reins.  Brolin is the spitting image of Jones and the similarity between the looks and mannerisms of the two actors is one thing that really makes the time shift aspect of the film work well. 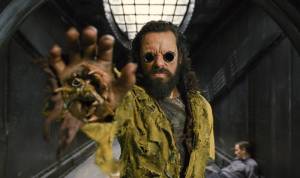 Agent O has her moments but could have received a bit more attention from the writers in my opinion.  Most of what we learn about her character is in the context of her relationship with K.  I’ve always had a bit of an issue with female characters existing in many movies for the main purpose of further developing their male counterparts rather than standing out on their own, and I recognize the movies’ focus was bound to be mostly on the two protagonists but with such strong actresses playing the role I was hoping for more out of O.  Finally, we have our dastardly villain Just-Boris (NOT Boris the Animal).  Boris nails the creep factor with his character’s spiky insect-like physical features below his human(ish) outer body, in fact its almost impossible to recognize the Flight of the Conchords alum under all of the extensive makeup and CGI.  Speaking almost entirely in cheesy one-liners, Boris isn’t anything to call home about but in comparison to the past sets of alien antagonists of the previous films, he feels perfectly up to par.  Almost forgot, there’s one other stand out I’d be remiss if I didn’t mention.  That stand out is Griffin, a soft-spoken fifth-dimensional being in human form, and his character’s soft spoken combination of tortured sole and last survivor or a dying race often felt like one of the most emotionally complete characters in the entire movie. 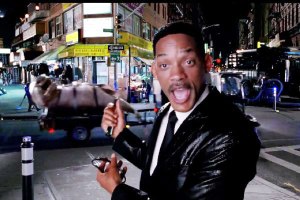 With a screenplay written by a newcomer to the franchise (Etan Cohen, no not Ethan Cohen, Etan), I was impressed with how true to the original films MIB 3 felt.  I expect a lot of Agent J’s dialogue was heavily influenced if not improvised by Smith himself, but as far as the story, supporting characters and main character development went it all felt like we were watching the same vision Lowell Cunningham had when he penned the series over a decade ago.  There is still the sense of over-the-top fun behind all of the gadgets as well as the ongoing parade of alien oddities in the periphery of every scene.  Some of the humor falls a bit flat and even more of it feels like the writers had a bit too much fun with the script (“The Viagrans would like to talk to us about a wonderful new pill they’ve developed”) but for every face-palm worthy piece of typical MIB shtick there are just as many very funny moments largely thanks to Smith’s unflappaple charisma.  There’s one moment in particular which involves J and two 1969 highway patrolmen that especially stands out, so keep an eye out for it.

As I’ve always said, I have a lot of respect for movies that deliver on the promises made by their advertisements and give the audience what it is looking for.  In this case, I was expecting a Men in Black film in the same vein as its predecessors with enough unique aspects and fresh material to justify bringing it back after such a long break, and as I walked out of the theater I felt like that was exactly what I got.  There is certainly a lot lacking in this film, and between the lack of peripheral character development and the feeling of comedic laziness I got from a lot of the jokes, Men in Black 3 never quite managed to rise above the level of an entertaining diversion from an otherwise quiet Sunday afternoon.  My recommendation would be to save your money for the Dark Knight Rises this weekend and wait for MIB 3 to come out on DVD, at which point it should provide a pleasant way to spend an evening with your friends or family.

I'm a student at the University of Washington Majoring Business. I've always loved movies and my goal is to work on the financial side of the film industry. Until then though, I figure I'll spare my friends from my opinions and shout them from a digital mountaintop for anyone who's interested. After all, if a tree falls in a forest and nobody blogs about it, does it really happen?
View all posts by r361n4 →
This entry was posted in Action, Comedy, New Releases, Reviews, Sci-fi and tagged Agent J, Agent K, Aliens, Dark Knight Rises, Men in Black, Men in Black 3, movie reviews, movies, Time Travel, Tommy Lee Jones, Will Smith. Bookmark the permalink.

6 Responses to Men in Black 3 Review