Politics, in the words of South Park, does always seem to be a choice between a huge turd and a giant douche

Will Ferrell has been a polarizing force in the comedy world since he left his television Alma Mater Saturday Night Live.  Many of his movies (especially his  partnerships with fellow Funny-or-Die co-creator Adam McKay) have become some of the most popular and financially successful comedies of the last decade, and as a result he has constantly been among the list of the top paid actors in Hollywood.  However, a lot of his movies have been so blatantly self-indulgent (Casa de mi Padre) or overly childish and, frankly, stupid (Land of the Lost) that a lot of people will stay away from a movie simply because of his presence in it.  In any case, The Campaign looked from the start to be a return to form for Ferrell.  Both Ferrell and Galifinakis are playing right in their comfort zones and the topical appeal of a political comedy in an election year put this pretty squarely on my list of movies to look forward to.  It doesn’t hurt that director Jay Roach has the experience with both outrageous comedies (Meet the Parents, Austin Powers) and biting political commentaries (Recount, The Game Change) to make a movie like this work.  While the bite of the political commentary is lessened by the completely a complete and utter lack of subtlety, The Campaign is arguably the funniest movie that Will Ferrell has put out since Talladega Nights or Anchorman.

Nothing fascinating here.  Cam Brady (Ferrell) is the quintessential bumbling congressman who uses his flag-toting-buzz-word-spouting pseudo-patriotism to get himself elected term after term despite a complete lack of knowledge on popular issues and more than a few sex scandals.  After a particularly embarrassing incident involving a filthy message left on Jack McBrayer’s family answering machine, the Motch Brothers (Dan Aykroyd and John Lithgow) decide that they’d like to buy a different candidate for the district to better represent their profit-hungry interests.  For some strange reason, they choose Marty Huggins (Galifianakis) as their dark horse candidate.  Marty is a mild-mannered simpleton director of a local tourism center who accepts the 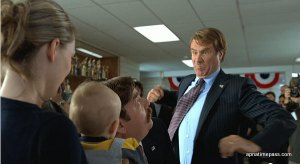 Damn those babies and their iron-like jaws

candidacy in an effort to impress his cantankerous father (Brian Cox).  After some initial bumbling in the face of Cam’s established political mud-slinging skills, he is approached by Tim Wattley (Dylan McDermott), a political strategist who procedes to turn Marty’s life and family upside down to make his look like a more appealing Republican candidate.  The rest of the movie follows the two as they result to increasingly dirty campaign tactics to win the election.

Just remember the 3 J’s of American Politics: Jesus, Jobs and Jumping to Conclusions

As I said above, both Ferrell and Galifinakis have essentially played these rolls before so it comes as no surprise that both do very well here.  Between the southern accent, the wealth-mediated ignorance, and the dysfunctional family headed by a superficial gold digging wife, Cam Brady is essentially Ricky Bobby in a suit.  Ferrell plays up the stupidity of his character to its fullest extent, but it never quite goes over the top like some of his other recent rolls have done.  If anything, the political “strategy” behind the scenes at Brady’s campaign headquarters feel like the most effective political commentary of the whole movie, especially in light of recent political ads released by Super Pacs on both sides of party lines (And yes, Super Pacs do get mentioned several times in the movie).  Of course any ad that suggests that anyone with a moustache might be Al Quaida is ridiculous, but so is an ad that suggests that Obama was born in Kenya or that Romney gives people cancer, yet we’ve seen both in real life politics over the past few years. 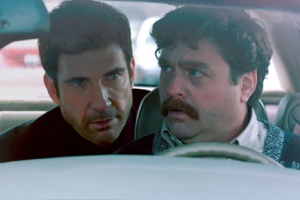 Rule #31 of Zombieland: Always Check the Back Seat

As for Galifianakis, Marty Huggins is essentially a hybrid of Alan from The Hangover and his fictional brother Seth from his Live at the Purple Onion Stand up special.  He’s always adorably soft spoken and dorky, but as the campaign goes along he lives up to his self-evaluation as “A dog with a lot of fight in him”.  While Ferrell is great in this movie, I really feel like it is Marty who steals the spotlight in both terms of character likability and overall comedy.  As far as the political aspects of his character, his character’s depiction does have some bite in the sense that it gives the impression that you could take any random person off the street and pump enough money into his campaign to make him a valid political candidate.

It’s cool to see King Agamemnon getting along so well with Joe Friday and the Trinity Killer.

There are a few standouts in the supporting cast, even if the only screen time most of them receive is overshadowed by the presence of Galifianakis or Ferrell.  Jason Sudeikis is fine here as Brady’s Campaign manager slash handler Mitch, but his appeal is more along the lines of a straight faced foil to Brady’s ridiculousness.  McDermott makes a bit more of an impact as the overbearing and laser focused campaign manager for Marty’s candidacy, and the sad thing is that I am fully comfident that people like his character exist in abundance in our current political world and are very successful at the work they do.  The Motch brothers are one of the weaker parts of the movie, and their oh-so-thinly veiled representation of the political finance giants the Koch Brothers is by far the most heavy handed and ineffective piece of the movie’s political commentary.

While this is no West Wing in its politics, it is the Comedy ring in which the movie truly soars.  While there are plenty of very funny actors to go around, I really believe that a lot of the credit for the movie’s humor goes to director Jay Roach, who’s implements the sort of impeccable comedic timing and placement that made movies like Meet the Parents so memorable.  There are plenty of references to pop culture and modern politics along with some relatively surprising cameos from real life media figures (Including Wolf Blitzer, Ed Schultz and Chris Matthews), and while it does occasionally flirt with the line of too much topicality it never distracted me from the humor behind it all.  Some of the best lines of the movie actually come from smaller bit parts like that of Karen Maruyama as Mrs. Yao, Brian Cox’s asian housekeeper who is paid to talk in a ridiculously over the top Aunt Jemimah accent to remind him of “the good old days”.

Don’t get me wrong, this movie had the chance to be a lot more than it was as a political comedy in an election year, but if you look at it as a comedy with hints of political satire rather than a political satire with hints of comedy, you will enjoy it all the more.  As of right now I’d actually say that between this and Ted (My previous favorite comedy of the year), I’d actually say that while Ted is a better movie, The Campaign made me laugh even more.  Bottom line, the trailers do a good job of representing the movie so if after seeing them you were planning on buying a ticket to this movie, I completely encourage you to do so.  You will not be disappointed.

I'm a student at the University of Washington Majoring Business. I've always loved movies and my goal is to work on the financial side of the film industry. Until then though, I figure I'll spare my friends from my opinions and shout them from a digital mountaintop for anyone who's interested. After all, if a tree falls in a forest and nobody blogs about it, does it really happen?
View all posts by r361n4 →
This entry was posted in Comedy, New Releases, Reviews and tagged brian cox, cam brady, congress, dan aykroyd, jason sudeikis, jay roach, john lithgow, marty huggins, movie reviews, movies, political satire, Politics, Sex, sex scandal, the campaign, the campaign movie, vote brady, vote huggins, will ferrell, zach galfianakis. Bookmark the permalink.

12 Responses to The Campaign Review: Ricky Bobby Runs for Congress