Ghosts of Movies Past: Recount Review

Fun Fact: Movie posters can also be made out of place-mat games

Hello again everyone, this time I come to you from a small town on the Southern German border called Lake Constance.  It is gorgeous here as has been the case for pretty much everywhere I’ve been in Germany over the past five days, but now that I’ve found a place with internet access I thought it might be appropriated to write up my review for a movie I managed to see in several parts while riding on the country’s amazing rail system (I really like Germany if you can’t tell).  In any case, here is my review for Recount, an incendiary dramatization of the events that occurred behind closed doors in the 2000 election for the President of the United States.  Featuring a great cast, serious subject matter and a director who previously had mostly only stepped foot in comedy films like Meet the Parents (and the more recent The Campaign), Recount is definitely biased in its depictions of the characters involved, but I believe that whether you’re Republican, democrat or independent this film will set a fire under you that will leave you with a much stronger desire to actually vote in the upcoming election.

P.S. There will only be spoilers if you have no knowledge of recent American history. 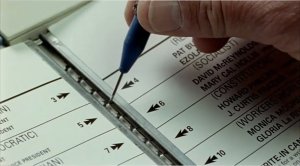 Who have thought that old people would have problems doing something correctly?

The year is 2000 and the film opens up on the final moments before the presidential election between Al Gore and George W. Bush.  We are introduced to the campaign headquarters of each candidate as election results start to pour in, and it becomes more and more evident that the election at hand will likely be one of the closest in American history.  On Gore’s side, we have Ron Klain (Kevin Spacey), former Chief of Staff to Al Gore and the film’s protagonist, along with Michael Whouley (Denis Leary) who provides a constant stream of profanity and motivation to Klain throughout the movie.  After major media networks call the election decisively for Bush, it soon becomes evident that Florida is still too close to call and that whichever direction the notorious swing state ends up leaning will decide the next President of the United States.  Once the closeness of the election mandates a state-wide recount, both campaigns muster their full legal and political strength behind securing the state for their man through whatever means necessary

As the movie is based on very well-known events in the real world, the plot plays a different role in Recount than it would in your average work of fiction. Regardless of whatever liberties the movie takes in its negative or positive portrayals of its subjects it is mostly bound by what actually happened.  What I did enjoy about this was that it provided and air of dramatic irony to the whole thing which constantly reminds us that no matter how hard Klain and his band of not-so-merry-men fight on, they are doomed to failure.  Like Romeo and Juliet, we know from the beginning that the protagonists are assigned an ill fate, and it puts a whole different perspective on the rest of the story that sets it apart from other similar works.  On the down side though, being bound to historical accuracy does give the movie a certain amount of pacing issues that give it a bit of an uneven feeling as a whole.  As T.S. Elliot might say, this is the way the movie ends, not with a bang but with a whimper.  Whether you voted for Gore or Bush or not at all, we can all sympathize with Klain’s drive not just to win the election for the vice president but simply to get all of the votes counted, and the fact that neither ended up happening in the 2000 election is more than just a little frustrating.

As I said before, our protagonist here is Ron Klain.  Spacey is great here, playing Klain as a mild mannered man with nevertheless unquestionable backbone and more fight in him than you would ever expect from a man of such collected composure.  His motivation throughout the movie is to get the votes counted and not just to win the election for Gore (He evens says at one point regarding the Vice President “I’m not even sure if I like the guy”).  In the face of the not-so-subtle political biases of the rest of the movie, Klain’s motivations provide a refreshingly non-partisan flag for the audience to rally behind.  I did find that my favorite scenes in the movie though were between Klain and Whouley and while some of those scenes feel a bit like they are intended to inform the audience about the situation than provide real character development I felt like the chemistry between Spacey and Leary did a lot to elevate even the most obligatory feeling scenes of explanation.  Aside from those two there are a

couple other characters I’d like to note from the Gore camp.  I have always loved John Hurt and he is perfectly fine here as Warren Christopher but his character is given little else to do than to be a voice of civility drowned out by the opposition’s unabashed political conniving. Christopher occasionally comes down from his high horse to play hardball, but I wish we could have seen a bit more life in his character.   In fact, the real Warren Christopher raised some objections to his character’s portrayal as a “wuss”, saying ‘Both Baker and I knew this would be a fight to the end that only one side could win.’  Finally, David Boies (Ed Begley Jr.) carries a very strong presence on screen as the proverbial “Good Lawyer”, and while I love that the lawyers in the Bush camp were so intimidated by him I also wish that he could have been introduced before the last twenty minutes or so of the movie.

That brings us the Bush side and slimy band of lawyers and political analysts which we are lead to associate with everything that is wrong with American electoral politics.  I could go over Ben Ginsberg’s character (Bob Balaban), but there are two other righties that I’d like to mention.  First and foremost of this is James Blake (Tom Wilkinson), the chief legal counsel brought on by the Bush campaign in response to the recount.  Blake is portrayed as slimy, underhanded and downright dirty for most of the movie, and while Wilkinson does a great job of playing the character I still couldn’t help but feel like Blake was the clearest sign of bias from the film’s creators.  Completely opposite of Klain, Blake wants nothing more than to win the election for Bush regardless of whether or not all the votes are counted.  He is redeemed somewhat near the end as we see that he really does believe that Bush is the right man for the presidency, but that motivation does little to excuse his methods for achieving that goal.  The last character

In the words of Towelie, “I have Absolutely no Idea what’s going on”

I’d like to touch on is Kathleen Harris (Laura Dern), the Florida Secretary of State and the woman charged with certifying the recount.  Harris is portrayed perhaps even less kindly than Blake, and her vapid, attention seeking naivety makes Sarah Palin look like a Rhodes Scholar.  Aside from the fact that her make-up makes her look like a sadistic clown or that the way she smiles between every sentence like a pageant queen, her character comes down to the quintessential puppet politician and the sway held over her by the republican party is one of the biggest driving forces in the democrat’s being beaten before they even started.

It’s hard not to view a film like this in any other colors than red and blue, and while there are many obvious biases in characterizations of both sides I never felt like the movie was trying to make the audience love democrats.  If anything the main villainous forces of the movie are not republicans but dirty politics on both sides of the aisle.  From that perspective, I can understand why some may find the film’s detailed look into the electoral process a little too tedious but I for one was more than interested in even the most tedious explanations of things like the issues with hanging chads.  Because of that I found Recount to actualy be satisfyingly suspenseful in the vein of legal dramas like State of Play or Runaway Jury and I would strongly recommend it if you are interested in the material it covers.

I'm a student at the University of Washington Majoring Business. I've always loved movies and my goal is to work on the financial side of the film industry. Until then though, I figure I'll spare my friends from my opinions and shout them from a digital mountaintop for anyone who's interested. After all, if a tree falls in a forest and nobody blogs about it, does it really happen?
View all posts by r361n4 →
This entry was posted in Drama, Reviews and tagged ben ginsberg, bob balaban, denis learey, dimpled chad, florida recount, hanging chad, HBO, james baker, kevin spacey, movie reviews, movies, recount, recount 2000, recount 2008, recount movie, ron klain, tom wilkinson. Bookmark the permalink.

3 Responses to Ghosts of Movies Past: Recount Review