Sorry, just having flashbacks.  I imagine this is the closest a movie can come to giving me PTSD, but if not I’m scared to see what is…   Let’s back up though.  Some of you might remember from my review of last year’s Sinister that I am not a fan of scary movies.  The feeling of being terrified for 90 minutes and leaving the theater feeling jumpy and paranoid for the next 48 hours just doesn’t really do it for me.  That being said, I acknowledge when a movie sets out to do something and does it extremely well.  Ted set out to be incredibly funny, and it did so with aplomb.  Mama sets out to scare the shit out of people, and in my case I can honestly say that it succeeded with flying colors (in the metaphorical sense that is).  While it is poorly written and features and incredibly unnecessarily crappy ending, Mama is probably the most effectively frightening movies I’ve seen in years.

Annabel and Lucas are faced with the challenge of raising his young nieces that were left alone in the forest for 5 years…. but how alone were they?

THAT’S what we’re adopting? On second thought… *runs away screaming*

I’d like to mention one aspect of the plot that bothered me throughout the entire movie.  Here you have two girls who have been living on their own during their formative years in an empty cabin in the middle of the woods.  These girls are obviously unstable and in need of intensive, professional care, but what does the psychiatrist do?  He puts them in the hands of their Uncle Luke (Nicolaj Coster-Waldau) and his punk-rocker girlfriend Annabel (Jessica Chastain); two people who have no experience in either taking care of a child or psychiatric care.  Not only that, but when Lucas takes a tumble down the stairs and lands himself in the hospital, you keep these two violently disturbed girls under the charge the girlfriend who is quite open about her dislike for children…  Even Jodie Foster at this point is like WTF guys?!

Jessica Chastain is certainly a busy woman.  Between this, Zero Dark Thirty and the Broadway play she is currently starring in, perhaps its possible that she didn’t have enough  time to read every script she signed up for.  If she had, she might have left it someone more suited to such a clumsily written part, like Katie Holmes or any other talent-less twenty-something with a pretty face.  To be clear, I really do like Chastain but as hard as she tries she just can’t quite make Annabel feel like anything more than a slightly above average horror protagonist.  I did start liking her once she started to bond more with Victoria (Megan Charpenier), but most of her scenes before that just left me thinking “We get it, your personality is based on the fact that you play bass in a band”.

Coster-Waldau also has a soft spot in my heart along with everyone else who has ever appeared in an episode of Game of Thrones, but Lucas really isn’t given much development at all.  Most annoyingly, we know that he has a very strong desire to take care of his nieces but we never find out anything about his relationship with his brother that adds any sort of depth to that desire.  On top of that, for some reason the decision was made to have him also play his brother, Jeffrey, who’s reasons for killing his wife and kidnapping his daughters are never explained beyond “Shit, the economy is tanking, guess I better murder my entire family”.

If this demonoid was under my bed, I wouldn’t be able to sleep either

Finally we have the two girls themselves, Victoria (Charpentier) and Lilly (Isabella Nelisse).  I’m really, really hoping that the majority of their crawling scenes were done with the use of CGI, because of those little girls were seriously capable of moving like that I might have to start to learn how to sleep with my eyes wide open.  Victoria as the eldest is at least able to talk and eventually shifts sides from Team Mama to Team Annabel, but Lilly remains the demonic little animal that she was when they first found her.  I’ve got to hand it to the two little actresses for melding so well into the Del Toro vibe of the film, but that being said I do not envy their real life parents trying to sleep at night after watching their daughters in this. 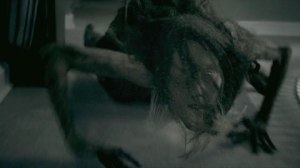 Finally, we have proof of the existence of Crab People

Aside from my issues with the ending that I’ll leave out to avoid spoilers, the writing was by far my biggest issue with the movie.  The acting is fine, the story is nothing special but at least capable, and director Andres Muschietti actually does a fairly good job of building the scary tone that makes the horror aspect of the film so effective.  The writing, however, definitely feels like what it is; a script written by two Argentinian writers and then translated into English by an american writer (Neil Cross).  It even occasionally reminded me of Troll 2, which was far worse of course but still contained a lot of phrases that felt like the person speaking them knew English as a second language.  This is definitely at it’s worst when an elderly record keeper is explaining what ghosts are to the girls’ psychiatrist.

+ Intensely Scary, if you’re into that sort of thing

Wylie Writes: “Enjoyed it through and through”

On the Screen Reviews:  “A Cheap Del Toro Knockoff”

I'm a student at the University of Washington Majoring Business. I've always loved movies and my goal is to work on the financial side of the film industry. Until then though, I figure I'll spare my friends from my opinions and shout them from a digital mountaintop for anyone who's interested. After all, if a tree falls in a forest and nobody blogs about it, does it really happen?
View all posts by r361n4 →
This entry was posted in Horror, New Releases, Reviews and tagged anna, jessica chastain, jessica chastain cleavage mama, jessica chastain haircut mama, jessica chastain tattoo mama, lucas, mama, mama 2013, mama annabel, mama cgi, mama crawling, mama ending, mama ghost, mama movie, mama review, nicolaj coster-waldau mama, psychiatrist, scariest movie of 2013, uncle luke, why is mama rated R?. Bookmark the permalink.