You heard me right, before Thursday night I had not yet been subjected to the apparent cheese-fest that is every Nicholas Sparks movie of the past decade.  Between The Notebook, Dear John, Nights in Rodanthe, A Walk to Remember, The Last Song, The Lucky One and now Safe Haven, releasing a movie based on a Sparks novel has seemed have become something of an annual event.  Based off of the fact that every film based off of one of his books has remained highly profitable despite horrible reviews, lazy marketing and the fact that all of the movies above seem to blend in together (cute white girl w/ problems meets hot white guy and love happens).  It only seemed fitting that I break into the Sparks sub-genre on Valentines Day with my girlfriend (Who I owed one since the last movie we saw together was Parker).  While it’s often melodramatic and features one of the worst, most unnecessary twist endings I’ve ever seen, Safe Haven was a much more bearable way to spend a date night than I had expected it to be.

Ryan Seacrest is will not love this movie…

A young woman with a mysterious past lands in Southport, North Carolina where her bond with a widower forces her to confront the dark secret that haunts her.

I’ve heard a huge amount of people complaining about how cliche and cheesy the plot is, but that’s exactly what I expected so it didn’t bother me.  In fact, there’s a shift that happens halfway through the movie regarding the circumstances that led Katie to run away that I actually made up for most of the annoyances I had with Tierny’s character (the cop).  That being said, if you do see this movie I pray, I pray that you leave about 60 seconds before it’s over.  If that movie had cut those last 60 seconds, I might have left the theater saying “okay, that wasn’t so bad” but instead I left saying “That was so bad!” 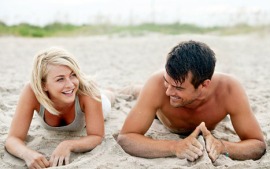 Maybe the South isn’t all bad

Katie (Julianne Hough) is completely interchangeable with just about any other Nicholas Sparks female character, only with a “dark secret” added in to make her feel a bit original.  She really doesn’t have much of a personality or anything else besides a pretty face, but I’ll at least hand it to Hough that she does a completely decent job of acting a flat character.  My biggest issue was that she seemed way too okay with rushing back into a new relationship after just coming out of an old one that ended… let’s say… badly.

Alex (Josh Duhamel) has a little bit to define himself beyond a handsome face, with the added level of “single dad” status to flesh him out.  I absolutely love how having a dead wife is a major turn on for most women, as my girlfriend confirmed for me.  Divorced on the other hand, hell no; the bitch has to be dead otherwise no deal.  My favorite part of his character though was the fact that he gave some reason for the child actors to be there, half of which ended up being my favorite part of the movie.  In case it’s not obvious, the half I’m referring to is the daughter;  she’s freaking adorable.

Throughout the central romance, the story regularly shoots back to the officer, Tierney (David Lyons) trying to track Katie down for whatever offense she’s running away from.  As I mentioned before, Tierney’s portrayed as a bit of a huge douchebag during the first half to the point where I had to stop and ask myself “Are they really making the movie’s antagonist the guy who’s job it is to track down murderers?”  Fortunately, this issue is explained about halfway through the movie, but Tierney himself still feels like a shallow caricature.

Finally we have Jo (Cobie Smulders), Katie’s next door neighbor and eventual best friend.  Now I love Cobie Smulders from her role as Robin in How I Met Your Mother, but seeing her in The Avengers led me to the conclusion that I will never be able to see her in anything else without thinking “Hey, that’s Robin”.  Luckily, she’s starting to realize that she has to take baby steps to get out of that character, and her part in this movie is much more along the lines of what she needs to do to transition into film than her character in The Avengers was.  I actually ended up liking Jo as she provided something of a voice of reason to balance out the usual irrationality most romances are ruined by. 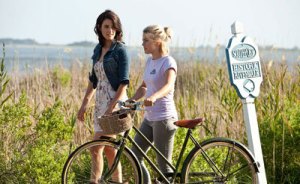 This movie is like eating at McDonalds: You know you’re eating crap, but at least it’s the crap that you ordered

I’d like to clarify that anything positive I’ve said about the plot has been more of an acknowledgment of what the movie doesn’t screw up than praise of what it does well.  The fact that the movie doesn’t completely jump the shark is impressive only because of how low my expectations were for it, and I credit almost all of that to director Lasse Hallstrom (Chocolat, What’s Eating Gilbert Grape).  As far as my opinions of Nicholas Sparks go, I feel like there is not a single thing I will take away from the movie except for how shockingly awful the ending twist was.  It felt like somebody took a completely decent film and literally tacked on a completely unnecessary twist, except instead of giving a feeling of profound surprise it just leaves you unsure whether you want to laugh or cry or attack the screen like a wild animal.

– Full of cliches and melodrama, but what did you expect?

– A terrible, terrible twist ending that could almost ruined the entire movie for me

P.S. As you can see, most people were much harder on this than I was.  I personally try to rate movies based off of what I expect them to do based on their genres, and I’ve simply seen far too many worse romances than this.  I’ve seen a lot of terrible movie than this this summer, movies that left me hating them with a fiery passion.  This movie did not leave me with that; all it left me with is a resounding “Meh” and a continued desire to not see any more Nicholas Sparks movies.