Oz the Great and Powerful Review: 99 Problems and a Witch… is pretty much all of them

I’d like to preface this review by mentioning that this was the first time I’ve ever seen a movie theater start playing the wrong movie.  Not just any movie, mind you, but the IMAX premier of a major blockbuster.  It took the theater 10 full minutes of Jack the Giant Slayer to finally switch over to the right movie, though I can’t say I’m complaining since Regal Cinemas does a great job at giving out free passes whenever anything goes wrong on their end.  But back to the project at hand.  I’ve always liked the original Wizard of Oz and know it pretty well considering I played in the Pit Orchestra for the Drama department’s production of it in high school (yeah, I’m that cool).  I’m not exactly in love with the film, but I nevertheless recognized the incredible feat it would be to bring back the land of Oz in a way that both pleases modern audiences and respects the legacy of the original classic.   Now that the movie has been released, the question stands;  can movie-geek favorite director Sam Raimi pull it off?  The answer is yes… mostly.  It occasionally struggles with mixing the whimsical, semi-cheesy tone of the source material and will never be remembered in the same way that The Wizard of Oz is to this day, but sharp writing and incredible visuals make Oz the Great and Powerful the first truly worthwhile blockbuster of 2013.

I’d like to note that I’m not very familiar with Wicked and the back story it provided the witches of Oz, but for the most part it seems like Oz the Great and Powerful does not acknowledge either aside from some basic elements of the plot.  While this may dismay some fans of that book/musical, I will at least say that I thought the movie did a good job of providing the origin story of the wizard himself consistent with the character from the original film 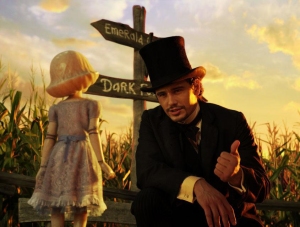 While I can easily see a lot of people turned of by James Franco’s slightly over-the-top sleaziness, I thought he was a great fit for the role of Oscar aka Oz.  After all, the wizard is essentially a fraud, relying on cheap tricks and illusions to convey the appearance of power rather than possessing any real power himself.  The situation of “con-man pretending to be something he’s not until he’s in over his head” has definitely been very well tread at this point, but Franco’s charm and some great companion characters (Zach Braff as Finley and Joey King as China Girl) make it all work in the movie’s favor.

It’s way easier to be evil when you’re British

The real problems come with the witches themselves.  While the casting here is all spot on, the tone issues I’ll dive into in the next section make them some of the weakest parts of the film.  I love all three actresses, and I can’t imagine many people who would have fit their parts better (other than Kunis, but I won’t spoil anything even though it’s pretty much already been spoiled for most of you).  Rachel Weisz is almost too perfect for her role, as the legitimate evil feeling she brings goes a bit against the cackling “I’ll get you my pretty” style of evil we expect from a witch of Oz.  Michelle Williams also seems almost too perfect for her role as Glenda, the Good Witch of the South, but it’s as if the movie couldn’t decide whether to keep her as the simpering goodie-two-shoes of the original or to give her a bit more of a human personality, and she ends up as an awkward mix of both. 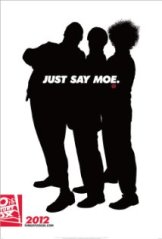 The Wizard of Oz is one of those classic pieces of  american culture that has the same barriers to modernizations as The Three Stooges had when it was remade last year.  The style and the tone of the film is unique to a particular era of film making, and any attempt to make a modern version of it has to make a choice whether or not to try to stay true to the voice of the original movie and alienate modern moviegoers or adapt the voice to the 21st century and betray the true spirit of the original work.  In the case of The Three Stooges, The Farrelly Brothers tried to stay as close to the pure, unadultrated slapstick humor of the original characters, and while the result ended up being a modest critical and financial success it will never be remembered on anywhere near the same level as those original characters are. 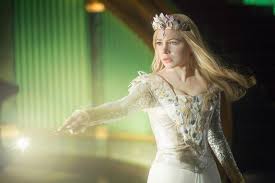 Glenda vs. Eleanor is still no Dumbledore vs. Voldemort

Oz the Great and Powerful tries to split the middle between faithful representation and modernization, and the end result is… awkward.  I think a lot of people will appreciate the attempts the movie makes to stay true to the 1939 classic, but those attempts still seem very out of place when combined with the modern styles of comedy and suspense they are surrounded by.  Ultimately, I think a lot of people will enjoy this movie but it’s lack of a real identity for itself will prevent many people from remembering it for long.

+ Breathtaking visuals, by far the best modern contribution to the merry old land of Oz

+ Franco fits his role very well, even if he is occasionally a bit over the top

i’m a movie nerd:  “Oz IS Great and Powerful”

My Reel POV: “Worth A Watch”

25 Responses to Oz the Great and Powerful Review: 99 Problems and a Witch… is pretty much all of them