Movies I Should Have Seen By Now: Weekly Round-Up 2

I’ve finally completed the second round of my efforts to catch myself up on Movies I Should Have Seen By Now.  This week we once again have five different movies from a wide range of time periods and genres.  Let’s see how they stacked up in my book.

Now that I’ve seen this, I completely understand all of the comparisons made between this and The Perks of Being a Wallflower (one of my favorite movies from last year).  The Breakfast Club is a perfect example of a movie that defies aging.  The characters are still easy to relate to despite their 80’s fashion sense, and the dialogue between them is so honest and powerful that the lack of a plot is a complete non-issue.  This remains and will likely always remain the quintessential coming of age movie.

I can think of at least three of my blogging comrades who list this in their favorite movies of all time and as such I am hesitant to give it a score this “low”.  When it comes down to it though, my problem with Goodfellas wasn’t so much a problem with the movie itself as it is with my dislike for the mob/mafia genre as a whole.  Between this and the Godfather movies, I’ve never been able to get into the kind of characters or situations put forth by the genre, regardless of how artfully done the movie is.  In any case, I do think that Goodfellas is a great movie featuring some fantastic performances by Ray Liotta and Robert DeNiro, but my issues with the genre along with the lack of any real build-up/climax in the plot prevented me from really connecting with the film (which I know is a result of the movie’s limitations of the real life events it is depicting).

Like American Beauty, I honestly believe that this is a perfect examples of how relatively recent films can earn the label of “classic”.  American History X tackles the issue of race and misdirected hatred better than any movie I’ve ever seen, and a large reason for this is that it doesn’t completely vilify either side.  It’s hard to go into every issue explored here without drawing things out into a full review, but I will at least say that the film does a very good job at showing just how hate, anger and despair create the sort of conditions that allow racism to flourish.  While the bigotry of Danny Vineyard (Edward Norton’s character) is indefensible and repellent, the movie forces us to see things through his eyes and it can be scary sometimes to see how easy it might be to try to find anyone and anything to blame for our problems in life.  None of this would have been nearly as effective, however, if it wasn’t for Edward Norton’s performance which, in my opinion, stands as his best ever. 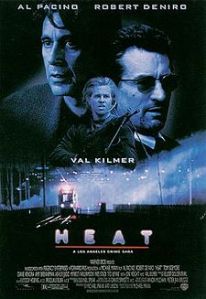 Like Goodfellas, this is another one that I thought I would enjoy more than I actually did.  Between it’s star studded cast and its status as one of the few action movies to make the IMDb Top 250, I expected Heat to stand along Die Hard as one of my favorite action movies of all time.  While there are plenty of elements that come together to make a very good and occasionally thrilling film (Robert DeNiro’s great performance, a few expertly executed and very large scale action sequences), I felt that the movie actually placed a bit too much of its focus on the characters and not enough on the actual action.  I understand that it aims to humanize both sides so as to blur the lines between good guy and bad guy, but the added character development makes the movie’s long 2 hour 40 minute run time drag out in a lot of parts.  I also have come to the conclusion that I’m just not really that big of an Al Pacino fan, which left me thinking to myself “Just get back to DeNiro already” almost every single time he was on screen. 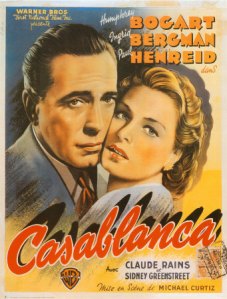 To give you some background, there are only a handful of movies I would ever award a 9.5 to, and all of those movies fall in my top 10 favorite films of all time.  That list includes All About Eve, The Return of the King, The Dark Knight and now Casablanca.  There have been a lot of classic movies that I’ve watched that have either disappointed me in a way that might make be very unpopular with some (Citizen Kane, Psycho), but most I end up enjoying and respecting yet not worshiping like many do.  Casablanca has so far been one the only “classic” movies that I feel I can completely stand behind without the slightest hesitation.  Between great characters to spare, heaping portions of memorable dialogue and  a story that weaves in the character’s humanity with the broad scope of the world at the time, Casablanca completely deserves it’s title of one of the best movies of all time.

Well, there you have them.  I know some will dislike my scores on a few, but that’s the very reason I named my site Rorschach Reviews;  when two people look at a movie, neither will see the same exact thing but that doesn’t make either one right or wrong.  I completely welcome any dissenting opinions in the comments below so I can understand what you see.

Finally, here is my schedule for the upcoming week.  As a quick note, I’m going to try to keep each movie for a given week from a different decade to widen the range a bit.

Stay tuned for my upcoming reviews of Dead Man Down and The Call!

I'm a student at the University of Washington Majoring Business. I've always loved movies and my goal is to work on the financial side of the film industry. Until then though, I figure I'll spare my friends from my opinions and shout them from a digital mountaintop for anyone who's interested. After all, if a tree falls in a forest and nobody blogs about it, does it really happen?
View all posts by r361n4 →
This entry was posted in Movies I Should Have Seen By Now, Reviews and tagged action movies on the imdb top 250, al pacino, american history x, classic movies, goodfellas, heat, robert deniro, the breakfast club, the breakfast club perks of being a wallflower. Bookmark the permalink.

20 Responses to Movies I Should Have Seen By Now: Weekly Round-Up 2