Movies I Should Have Seen By Now: Weekly Round-Up 3

I made one small change to the announced schedule last week, so to any of you who were looking for my opinion on Mr. Smith Goes to Washington I’m afraid I’m going to have to have you wait a bit longer.  In any case, with March proving to be the season of “Meh” Movies dominating theaters, it’s been really nice to balance it all out with the greatness of the classic movies I’ve been catching myself up on.  Here’s what I introduced myself to this week.

It’d take pages and pages to explore every significant part of the movie, but I’ll try to keep it as short as possible.  Essentially two separate movies, Full Metal Jacket examines the nature of war from training to full combat.  The first half introduces us to all of the necessary characters and highlights the brutal process that is the training of a United States Marine.  All of that is secondary to the infinitely quotable Gunnery Sergeant Hartman (Lee Ermey), the ultimate embodiment of the tough-as-nails drill sergeant that so many military-related movies have featured.  A young, fleshy Vincent D’Nofrio is also incredibly terrifying as the weakling-turned-psychotic-killer Gomer Pyle.  The second half of the movie is perhaps a bit less focused, but the overarching theme of just how f*cked up war really is never leaves the spotlight.  Also, Animal Mother is a boss.

Don’t hate me, but this is only the second Alfred Hitchcock movie I have ever seen.  The first was Psycho, which I am sad to say I was not a fan of.  I’m incredibly relieved that my second experience with his work was much more satisfying, and I’m eager to dig much deeper into his body of work.  Rear Window features some great performances from Jimmy Stuart, Grace Kelly and Thelma Ritter, but it’s Hitchcocks’s directing that really set the movie apart in my eyes.  The choice to film the entire movie from Jeff’s apartment gives the entire thing a very claustrophobic feeling that does wonders for the movie’s ability to build suspense.  My only quibble would be that the movie does such a great job of building up to the final conclusion, yet when it all erupts in the last few minutes of the movie it’s over so quickly and abruptly that I felt a little disoriented.  Note to self, using one-use flashbulbs against an intruder isn’t a very effective means of self-defense.

My second Miyazaki film (the first being Howl’s Moving Castle), Spirited Away is one of the most creative pieces of animated film making I’ve ever seen.  Something of an Anime cross between Alice in Wonderland and The Wizard of Oz, the world Miyazaki creates in Spirited Away is the kind of weird which makes you endlessly curious rather than skeptical or frustrated.  The characters are all fairly standard as is the idea of a child learning a lesson by being whisked off to a magical place of questionable existence.  The beauty of animated movies like this though doesn’t lie in their ability to execute complicated plot twists or character arcs, however; it lies in their ability to take an animated character and give them a soul.  In this respect, Spirited Away is rivaled only by the likes of Pixar and classic Disney. 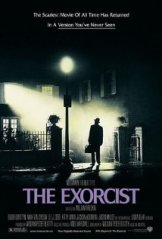 It’s no secret that I’m not a huge fan of horror.  There are a small group of horror movies from the past forty years or so that I absolutely love, but the rest don’t even fall into the categories of movies I would ever chose to watch again.  On that list are the likes of Jaws, The Shining, Alien, and now The Exorcist. While it may not be quite as edge-of-your-seat scary, director William Friedkin favors chills rather than thrills.  Sure the effects are a bit outdated, but it’s the characters here that raise the movie above the hoards of copy-cats that have followed it. Ellen Burstyn and Lee Cobb bring a level of respectableness to the cast that is supported by the level of character development.  My favorite by far though was Jason Miller as Father Damien Karras, who proves to be a very well-rounded and sympathetic character throughout the film.  It’s just a shame Miller’s career never really broke out of his Exorcist roots.

I love, love, LOVE British comedies.  I was raised on Monty Python and the like, and once I grew up a little I transferred that limey love onto movies like Hot Fuzz and Death at a Funeral.  Because of that, it’s about as much a wonder that I had not seen this yet as it was a wonder I hadn’t seen Rocky or Casablanca.  Featuring the One-Two punch of Python alums Michael Palin and John Cleese alongside the sparkling presences of a young Kevin Kline and Jamie Lee Curtis, A Fish Called Wanda is one of the weirdest, funniest and memorable dark comedies I have ever seen.  Mixing together elements of double-crossing, scheming, larceny and murder all with a sprinkling of over-the-top deadpan comedy the Brits are known for, this is one that I am sure to be watching again in the not-so-distant future.

This week, I’ll be checking out these fine films.

I'm a student at the University of Washington Majoring Business. I've always loved movies and my goal is to work on the financial side of the film industry. Until then though, I figure I'll spare my friends from my opinions and shout them from a digital mountaintop for anyone who's interested. After all, if a tree falls in a forest and nobody blogs about it, does it really happen?
View all posts by r361n4 →
This entry was posted in Movies I Should Have Seen By Now and tagged no tags again, nope. Bookmark the permalink.

16 Responses to Movies I Should Have Seen By Now: Weekly Round-Up 3