Tim the Film Guy is the head writer of Tim’s Film Reviews.  My current top commenter, Tim’s detailed breakdowns in his scores and excellent taste make him another easily recommendable stop along the blogging trail.  Check out his site here and keep an eye out for our up coming Blogger Interview.

Recently I was asked to take part in a review of Scorsese’s films by Andy, there was a list and we had to pick a film we hadn’t seen so I picked Gangs of New York. Got a copy and 10 minutes into the film defuq is happening!? I had no idea what this film was about at all but I do now and like it. The story of this film is madness pure and simple. The characters are fantastic in this film, crazy and totally unpredictable which what I like in a really entertaining film. The visuals in this film are really great, I know it had a pretty big budget and it shows in every detail. This film is historical fiction very much like Django Unchained it is based around truths in the past but has its own story and characters.

“Mulberry Street… and Worth… Cross and Orange… and Little Water. Each of the Five Points is a finger. When I close my hand it becomes a fist. And, if I wish, I can turn it against you.”

The story of this film is madness pure and simple. It starts off with no context what so ever in a conflict that looks insane without any prior knowledge, actually it’s still crazy. The fighting is all around race and territory and religion and revenge, you know the normal stuff we fight about but in a really small and cramped area of New York. I think this is the best thing Scorsese did in this film, examining the absurdity of most conflicts especially revenge as it will only give a person a hollow victory if that. There’s a great shot in the first fight were we see the fighting from the kids point of view and it just looks like a hoard of people fighting in grey clothes over the white snow, there’s no identifying one person from another and child’s view it seemed even more insane. Throughout the film the American civil war is mentioned and comparisons are drawn as this tiny piece of the country is in its own conflict.

The characters are fantastic in this film, crazy and totally unpredictable which what I like in a really entertaining film. You can never get bored watching a film with characters who you just can’t predict. We’ll start from the top and talk about Daniel Day-Lewis who plays the most entertaining character in this entire film. He’s violent, racist and bat shit crazy! Cut out his own eye and replaced it with a glass eye with an eagle on it. My favourite scene of his would have to be at the celebration of his victory when he finds out who Amsterdam really is and you get to see him from toying cruelty to crazy violence as he attacks Amsterdam, it’s a great scene where you get to see Daniel Day-Lewis go all out and its scene you just can’t look away from. Leonardo DiCaprio whilst not creating my favourite character of the film he still did well and on his game. Brendan Gleeson was great to watch, Liam Neeson was short and sweet as always, and Scorsese know how to make everyone work together for an entertaining time regardless of their individual talents. 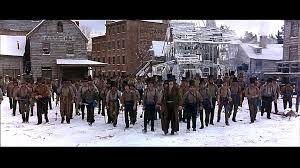 The visuals in this film are really great, I know it had a pretty big budget and it shows in every detail and of the vast scale of the film. Right from the get go you get a giant fight with about hundred men with basic weapons and it all looks real with giant sets and large acting casts. The costumes and buildings look great and considering it cover pretty much everything; we get the rich, the poor, the middle class, the different gangs and the military. The whole lot is very impressive considering this is not Scorsese’s forte and so he created a world which looked to match the time.

This film is historical fiction very much like Django Unchained it is based around truths in the past but has its own story and characters. I love historical fiction especially if it’s to highlight something happening in that time zone; like in this it’s the American civil war and mass immigration from Ireland. The style of the film is so brash and unforgiving that it’s hard not to get suckered into this strange world and its customs. I think you can love this film as long as you can watch Daniel Day-Lewis fight with Liam Neeson one with a meat cleaver and one with an iron cross and go this is crazy but I like it!

My favourite scene would have to be the annual celebration of the butcher’s victory in that opera place. It’s a great scene were we get to see Daniel Day-Lewis play with knifes and people because he found out who Amsterdam really is and it’s so dramatic to watch because he can flip the switch so quick from in control to full on crazy and it’s great to watch

I'm a student at the University of Washington Majoring Business. I've always loved movies and my goal is to work on the financial side of the film industry. Until then though, I figure I'll spare my friends from my opinions and shout them from a digital mountaintop for anyone who's interested. After all, if a tree falls in a forest and nobody blogs about it, does it really happen?
View all posts by r361n4 →
This entry was posted in Reviews and tagged Cameron Diaz as Jenny Everdeane, Daniel Day-Lewis as Bill "the Butcher" Cutting, Gangs of New York, Gangs of New York (2002) Review, Gary Lewis as McGloin, Henry Thomas as Johnny Sirocco, Jim Broadbent as William M. Tweed, John C. Reilly as Happy Jack Mulraney, Larry Gilliard Jr. as Jimmy Spoils, Leonardo DiCaprio as Amsterdam Vallon, Liam Nee, Tags: Brendan Gleeson as Walter "Monk" McGinn. Bookmark the permalink.