The Host Review: Achieving the Impossible

Unfortunately, in this case “The Impossible” refers to the creation of something even more poorly written than the Twilight Series.  I don’t know why, but at some point in time I decided to let myself believe that this movie could be something more than the vampire angst-fest of Meyer’s previous claim to fame.  Maybe it was the futuristic Sci-Fi backdrop, or the presence of Saoirse Ronan and William Hurt, or maybe it was simply the trailers’ excellent use of “Radioactive” by Imagine Dragons.  Whatever it was, I managed to completely avoid any sort of reviews and enter into the theater with an open mind.  Unfortunately, I spent the next 2 hours of my life having my open mind forceably filled with this mindless, gratingly awful mess like some sort of reverse Pandora’s Box.  As horribly written as they come, the hollow characters and bad acting of The Host make it one of the most tragic abuses of the Science Fiction genre I have ever seen.

When an unseen enemy threatens mankind by taking over their bodies and erasing their memories, Melanie will risk everything to protect the people she cares most about, proving that love can conquer all in a dangerous new world.

Kissing in the rain? How Original!

That last line of IMDb’s plot summary says it all in terms of how silly the story of this movie is.  The movie takes something as huge as the conquering of our entire planet by an alien race and distills it down to something as silly and trivial as a love triangle.  Meyer doesn’t even make much of an effort to hide the fact that the movie’s human resistance is nothing more than an overly elaborate frame for the kind of immature, self-obsessed romances my generation seems to be enamored with.  The only aspect of this that presents any sort of intrigue is the idea of two separate beings, attracted to two separate people, being trapped in the same body.  That being said, however interesting the idea is it is so horribly executed that it ends up not making much of a difference.  If Meyers really wanted to know how to make that relationship dynamic work, she should have just watched The Prestige and taken notes. 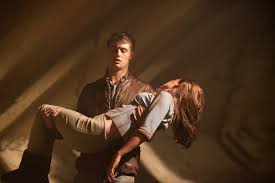 Miranda is the most bearable when unconscious

Even if the rest of the movie had contained brilliant acting, a compelling plot and amazing special effects, the gravity of just how bad the writing is would have still ruined all of it.  I have never read a Twilight book, but I’ve heard that Meyer’s writing style is just as bad as the movies themselves would suggest.  In my opinion, however, the level of writing in The Host is below even that of the Twilight films.  Alternating between blatant cliches, eye-rolling melodrama and lame attempts at comic relief, the script reaches a level of terrible that is usually reserved for Lifetime originals or Uwe Boll movies.

Split personalities has never been so dull

The worst offender by far, though, is the incessant barrage of internal bickering between Wanda and her host, Miranda.  Ignoring the weird mechanics of how the entire “body sharing” thing works, the dialogue that each character is given is nothing short of awful.  Because we never really get to see much of Miranda as a primary resident in her body with the exception of a few flashbacks, her character just comes across as incredibly childish and   utterly useless when it comes to helping out in the resistance effort.  Wanda’s a bit more bearable, but I never understood why she keeps trying to “save” Miranda when she’s essentially an embodiment of the sort of selfish, impulsive qualities that made us an undesirable race in the first place.

Stephanie Meyers is on a Taylor Swift level of arrested development

To be fair, it’s incredibly difficult for even the best of actors to rise above a terrible script.  That being said, watching a good actor or actress read off terrible lines is still much more bearable than watching mediocre-to-bad actors reading terrible lines.  Before this movie, I’d actually always thought of Saoirse Ronan (pronounced “Seer-sha”) as a pretty decent actress.  Watching her performance in this made me re-evaluate some of her work, however, and I’m now of the opinion that her lack of emotional range only lets her fit into the least dynamic of roles, i.e. Hanna (although I did like that movie).  As Wanda, she has about zero personality and even less development.  As Miranda, the only chance she has to make an impact is through her annoying voice-overs that constantly shift in and out of a Southern accent. 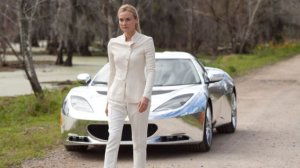 Chrome: Not the best camoflage in the world

On the supporting end, the picture is just as bleak.  Max Irons’ performance is about as wooden as they come, making the focus relationship with Miranda feel even more pointless.  Jake Abel is a hair better than Irons, but the romance between him and Wanda comes out of nowhere and is equally uninteresting.  William Hurt saves a little face for the film, which is unsurprising given the fact that he’s about the only seasoned actor in the entire cast.  All of that face is lost by Diane Kruger as The Seeker, the film’s main antagonist who could easily have been replaces with an actual block of wood to achieve the same effect.  Comparable January Jones’ emotionless role in X-Men: First Class, The Seeker has now robbed all of the goodwill I bore Kruger from her role in Inglourious Basterds. 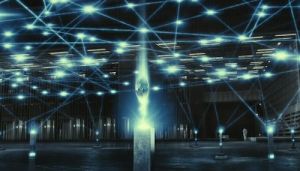 This scene probably took about half of the movies’ entire budget

As I said above, the Sci-Fi setting is nothing more than another frame for Meyers to plug in the same weak romantic crap she is so well known for.  The special effects are limited to a few city backdrops and the brief glimpses we get of a Soul’s physical form.  Other than that, the only other efforts the creators made to establish a futuristic setting is an overabundance of brightly colored contact lenses and The Seekers’ fanatical devotion to chrome plating.  While I’ll admit that the Lotus Evoras the movie uses are beautiful cars, their shininess is not enough to distract from the complete lack of ambition the film shows in its production values.

– The screenplay is among the worst I’ve seen all year

– The acting is atrocious, especially in the case of Kruger and Ronan

I'm a student at the University of Washington Majoring Business. I've always loved movies and my goal is to work on the financial side of the film industry. Until then though, I figure I'll spare my friends from my opinions and shout them from a digital mountaintop for anyone who's interested. After all, if a tree falls in a forest and nobody blogs about it, does it really happen?
View all posts by r361n4 →
This entry was posted in New Releases, Reviews, Romance, Sci-fi and tagged chrome plated cars, Diane Kruger, how to pronounce Saoirse Ronan's name, Is The Host worse than Twilight?, jake abel, jeremy irons, Lotus evoras, love triangle in The Host, miranda, No Nudity in The Host, No sex scenes in The Host, product placement in the host, Saoirse Ronan night gown the host, saoise ronan, Sci-fi in The Host, stephanie meyer, the host, the host 2013, The Host US, the wanderer, wanda, william hurt. Bookmark the permalink.

17 Responses to The Host Review: Achieving the Impossible

Leave a Reply to Tim The Film Guy Cancel reply