Movies I Should Have Seen By Now: Weekly Wrap-Up 5

Okay, so I realize that this “Weekly Wrap-Up” took three weeks to get done, but between Midterm season and a little side project I’ll be unveiling fairly soon, I’ve been pretty swamped.  I finally got around to seeing the last movie of my promised set of five last night, and with that viewing I am now able to move on to the next set of classic films.  Here’s a rundown of the films I saw since the last edition of this segment.

Having finally seen this it, I now understand why so many people considered January’s Gangster Squad to have been such a blatant rip-off of this vastly superior movie.  That’s not to say that I didn’t enjoy Gangster Squad for its own merits, but the similarities between the two films can’t help but force the comparison and there really isn’t any.  Setting aside the dynamite trio of Kevin Spacey, Russel Crowe, and Guy Pearce, the movie’s ability to manage the huge amount of moving parts that are present without collapsing under its own weight is impressive in its own right.  Those moving parts do give the movie some pacing issues, but once we actually start to figure out what is going on things quickly accelerate until the amazing conclusion.  Bottom line, L.A Confidential is one of the most elaborate and well-made cop thrillers I’ve ever seen.

Yet again, this is one I know I’m going to catch some flak for.  Heralded by many as one of the best Science Fiction movies of all time, 2001: A Space Odyssey also comes from the supposedly infallible Stanley Kubrick.  I’d like to reinforce that I love every other Stanley Kubrick movie I’ve seen, but I just couldn’t get behind this one once the credits started to roll.  To be fair, the movie could easily be separated into four separate parts, and the most prominent of those parts (aka Dave vs. HAL) is by far the most effective.  I absolutely loved that segment of the movie, due in equal parts to Kubrick’s claustrophia-inducing direction and the cold, monotone voice of HAL himself.  I could even handle the opening twenty minutes, which have no connection to the rest of the film other than an elaborate and prolonged metaphor about humanity’s relationship with technology.  The following Moon segment is perhaps a bit slow and overly reliant on extended shots of spacecraft which aren’t quite as powerful now as they were back then, yet it does a good job of building up a sense of mystery and dread surrounding the recurring alien Obelisk discovered on the lunar surface.  My biggest issue with the film is that the culmination of all of these elements is a twenty-minute long acid trip of an ending sequence that is as incoherent as it is inconclusive.  I’m sure people will say that I just don’t get the artistic brilliance of the ending, but to that’s the thing about high-concept art; no matter how “brilliant” it is, it’s just not going to work for some people.  Turns out in this case, I am one of those people. 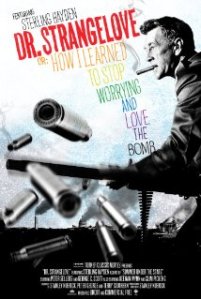 If you were to ask me what my favorite genre of movie is, I would be able to answer without any shred of hesitation;  I LOVE dark comedies.  My sense of humor has always been a little warped, but whether it’s the over-the-top violence of Tarantino or the sparkling dialogue of a Joss Whedon script, I can’t get enough of twisted humor in film making.  For that reason, I’ve been looking forward to seeing Dr. Strangelove: How I Learned to Stop Worrying and Love the Bomb for some time now; after the ground it broke into for the genre is one of the reasons the genre is so bountiful in the present.  The movie is just as weird as the title would suggest, and I loved every bit of it.  Between great one-liners (“You can’t fight in here, this is a War Room!”), comically exaggerated insensivity and the complete and total sense of originality throughout the film, Dr. Strangelove deserves every bit of the cult-following it has maintained to this very day.  My only reason for the slightly lower score is that like most films with a cult following, the material is not quite as accessibly to average viewers as many would like.

Oddly enough, I was almost more worried that I would dislike this movie more than I was for any other movie on this list.  The split nature of it’s reviews (it hovers around a 50% on Rotten Tomatoes) combined with the intensity of it’s fan base’s support make dissing Top Gun nearly as life-threatening as dissing Die Hard.  To be honest, I could easily populate a long list of reasons to hate this movie; from the boring, unnecessary romance to the heavy-handed overuse of the synth-heavy soundtrack (If I hear “Take My Breath Away” one more time, I’m going to lose it), the movie invites criticism at every turn.  The thing is, no matter how cheesy it got, I just kept on forgiving it in my mind.  The movie has this way of  bringing you around to its side that only 80’s movies could pull off.  It’s the reason that the script remains so quotable regardless of how poorly written it is, the reason why many people select this as their favorite Tom Cruise performance even though there are plenty of other, better roles he has played in his career.  At the end of the day, no amount of logic or sense can diminish movies like this for the people who love them, and I am happy to finally be able to count myself among that group.

I’m not quite sure why this movie made it onto the list last week, but in hindsight I’m glad it did.  I had never seen Robert Redford in anything pre-90’s, and had never seen Paul Newman in anything at all.  If the duo’s performances here are any indicator, though, that is a wrong I am eager to go on right-ing.  The Sting reminds us why movies about con men conning other con men will always be a huge amount of fun, even if most modern renditions don’t come anywhere near this level of quality.  There’s something about the premise that allows viewers to completely forget the sort of moral concerns that usually plague criminal protagonists, and instead look at the proceedings like some sort of elaborate, high stakes game.  By doing this, the movie is able to get away with a much lighter tone than you might expect.  While this light tone robs some of the more serious elements of the move from a bit of their weight (especially visible in the vaudevillian background music for some of the chase scenes), it hit’s its mark far more often than it misses.  Even when the con itself gets a bit too elaborate to remain believable, it’s still fairly easy to suspend disbelief and forgive the film for its unrealistic developments.  My hat goes off to the late Robert Shaw in particular for providing the movie with a much-needed villainous role for the audience to unite against.  All in all, is as entertaining as it’s theme song’s title would suggest.

For the next set of films, I’d like to try something a little different.  Instead of picking the entries myself, I am going to put it up to a vote from all of you to decide which movies I will  see for the first time.  The three polls down below represent the three categories of movies I am looking to represent; two films from the IMDb Top 250, two films from the AFI Top 100 , and one film that has had a lasting cultural impact regardless of what lists it is or isn’t on.  Please take a second to cast your vote below!

I'm a student at the University of Washington Majoring Business. I've always loved movies and my goal is to work on the financial side of the film industry. Until then though, I figure I'll spare my friends from my opinions and shout them from a digital mountaintop for anyone who's interested. After all, if a tree falls in a forest and nobody blogs about it, does it really happen?
View all posts by r361n4 →
This entry was posted in Movies I Should Have Seen By Now, Reviews and tagged nope no tags again. Bookmark the permalink.

21 Responses to Movies I Should Have Seen By Now: Weekly Wrap-Up 5