Posted on June 8, 2013 by r361n4
Today we have another entry in my Scorsese Spotlight series courtesy of Aaron Neuwirth, the man behind The Code is Zeek.  Aaron also previously reviewed Bringing Out the Dead for this series, and was kind enough to help out again for another Scorsese classic.  Here is his review of Mean Streets.

Charlie:  You don’t make up for your sins in church. You do it in the streets. You do it at home. The rest is bullshit and you know it. 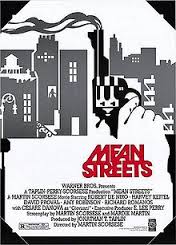 I previously reviewed Bringing out the Dead for my two-part guest reviewing stint that has been focused on covering the career of Martin Scorsese.  Now I am writing about one of Scorsese’s earliest works, which is a fitting companion piece to his 1999 effort.  Mean Streets is one of Scorsese’s more personal films, as it tackles a topic that he has put on film quite often, small-time gangsters, while also factoring in his Catholicism.  The film is less about story and more focused on the lives of these characters and being able to familiarize the audience with the kind of atmosphere they live in.  Many of Scorsese’s best films are more about characters and a series of events that lead up to something, rather than really being driven by a narrative and Mean Streets is one of the best examples of this.  It was made with a fairly low budget and has signs of an early director finding his bearings, but the roots of many of Scorsese’s other films, let alone the work seen from other directors, have been firmly planted here.  While Scorsese would go on to make some of the best films of their respective decades, Mean Streets is a great film to have as one of his starting points.

As mentioned, the film is largely constructed outside the realm of a conventional narrative, but there is a very basic plot thread:  In a series of character-led incidents, set against the background of New York City’s Little Italy, we follow the life of Charlie 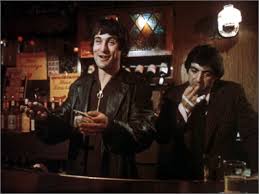 (Harvey Keitel), a small-time member of the wiseguy community, who collects protection money.  His friends Tony (David Proval) and Michael (Richard Romanus) are part of the community, but his other friend Johnny Boy (Robert De Niro) is unreliable, owing debts all over town, yet carefree in his attitude.  Charlie also has secret girlfriend, (Johnny Boy’s sister) Teresa (Amy Robinson), who has epilepsy, making it a relationship that would be frowned upon, were everyone to know about it.  When Charlie’s uncle, Giovanni (Cesare Danova), offers him a restaurant, the first step up the ladder, Charlie is forced to choose between his desire for power, his love for Teresa, and his duty to protect his friend Johnny Boy.  During all this time, Charlie is contending with his own devotion to Catholicism as well, which weighs on him as he makes choices that have led him to working on New York’s mean streets.

Many consider Mean Streets to be one of the quintessential New York movies.  I cannot quite agree, simply because I have never been there, let alone was not alive during the time that this film takes place.  With that said, there is a level of authenticity that comes 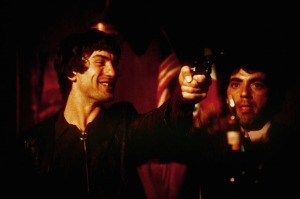 through in how this film is presented, which is especially interesting, given that a lot of the film was shot in Los Angeles.  I guess I would have to say that it is not so much the use of location, but the attitude that comes from this film, thanks to the actors involved (many of whom are from Brooklyn) and the way this story is presented.  I do not know what the mob scene is like in real life, I have never interacted with small time hoods from the city, but Scorsese easily demonstrates a (possibly stylized) life that revolves around these ideas and takes place within an area that he saw fit to recreate on film.  As a result, Mean Streets does continue to feel like one of Scorsese’s biggest achievements, as he was able to create a film that would be received well enough to keep him going as a filmmaker, while further launching the careers of acting greats Harvey Keitel and Robert De Niro.

Focusing on these two actors, it seems quite clear as to why Keitel and De Niro were able to continue to find success as the years went on.  I do not intend this to be a knock against the other actors in this film, as the cast is generally good here (with minor

exceptions, given some of the amateur actors in smaller roles), but Charlie and Johnny Boy are obviously the most important characters in the film.  Harvey Keitel, to me, is an actor who, in his best roles, is one of the best actors of all time.  In Mean Streets, I find Keitel to be absolutely fantastic in the way he brings religious guilt to the mind of a man who wants to be a guy that can work for shady characters, like his uncle.  As Charlie, we can see he is a good man at heart and also an accepting person, given his flirtations with people that most of his friends would have no desire to be seen with.  The way these aspects of his character essentially lead to his downfall are what makes this movie work as a compelling tragedy, once it does settle into having some sort of narrative conclusion.  Still, the fact that Keitel makes this character so sympathetic is what gives that tragedy weight and it really makes me miss seeing him in the later films of Scorsese’s career.

Robert De Niro is obviously good, because this is the 1970s, when De Niro was constantly delivering amazing work on film.  Still, for this being the first film

collaboration between De Niro and Scorsese, the two got off to a great start, as De Niro seems very comfortable on screen as the reckless Johnny Boy.  He is so comfortable that the film is confident enough to not really inform you as to why Johnny Boy is the way he is, because it gets that people know that kind of person De Niro is playing and do not need much else to go on, aside from the terrific acting on display.  The best bonus is that Keitel and De Niro have such obvious chemistry together, making their scenes feel heavily improvised, regardless of how much of the “eys” and “ohs” between two Brooklyn guys were actually scripted.

Putting the focus back on Scorsese, something I really enjoy about Mean Streets is how it takes a lot of its screen time to play as a great hangout movie, which happens to be set amidst small time hustlers and some very angry people.  Scorsese’s filmmaking does not

betray what is going on beneath the surface, but he makes a very leisurely film to enjoy, as his camera has a way of lingering on certain scenes to make you feel like you are actively listening to real conversations between people.  At the same time, the film has a number of stylish elements, including a wonderful and well-known Steadicam shot, as Charlie enters a club, early on in the film.  Scorsese’s love for 70s rock and pop is obviously evident, as the film is packed with great tracks throughout, which would define many of his later films in a similar manner as well.  Even scenes that border on being more action oriented are staged fairly well, given the low budget of the film and the relative novices that were involved.

After revisiting Mean Streets, which has come after seeing recent work by Scorsese and revisiting some of his older films, I continue to view it as one of his most accomplished pieces of work, especially as it gets by based on character, as opposed to plot.  Similar to

my first write-up for Bringing out the Dead, the film acts as a way to view inside the mind of a certain character, as he deals with an eventful few days in his life.  It has places to go from a story standpoint, but it takes its time and lets us observe the lives the people involved first and foremost.  Of course, the added element is that Mean Streets is an incredibly personal film for Scorsese and that provides it some edge as well.  There is some raw emotion being explored and a lot of that comes through thanks to the terrific lead performances involved.  I may love to watch Goodfellas more, there may be more to analyze in Taxi Driver, and the most recent film by Scorsese (at this point), Hugo, may present ideas that intrigue me on a greater level, but Mean Streets is a film that firmly planted the roots of a filmmaker who had already made his debut, but had nowhere to go, but up.

Charlie:  It’s all bullshit except the pain. The pain of hell.  The burn from a lighted match increased a million times.  Infinite.  Now, ya don’t fuck around with the infinite.  There’s no way you do that.  The pain in hell has two sides.  The kind you can touch with your hand; the kind you can feel in your heart… your soul, the spiritual side.  And ya know… the worst of the two is the spiritual.

If you aren’t already (Shame on you!), you can follow Aaron’s at The Code is Zeek or on twitter at @AaronsPs3

I'm a student at the University of Washington Majoring Business. I've always loved movies and my goal is to work on the financial side of the film industry. Until then though, I figure I'll spare my friends from my opinions and shout them from a digital mountaintop for anyone who's interested. After all, if a tree falls in a forest and nobody blogs about it, does it really happen?
View all posts by r361n4 →
This entry was posted in Reviews and tagged Harvey Keitel Martin Scorsese collaborations, Harvey Keitel Mean Streets, martin scorsese mean streets, Mean Streets Movie Review, Mean Streets Review, Robert DeNiro Mean Streets, Scorsese Appreciation, Scorsese Review series. Bookmark the permalink.

1 Response to Scorsese Spotlight: Mean Streets (The Code is Zeek)