If you were to ask me who my least favorite director is (aside from Uwe Boll, who admittedly has some merits as a human pinata for in, I’d be torn between two people.  One of those people, for obvious reasons, is the all powerful hate-magnet Michael Bay.  The other, though is a man who often remains hidden in Bay’s shadow whenever talk of awfulness comes about, though I consider them to be on equal footing in this respect. That man is Roland Emmerich, aka the director of Independence Day, Godzilla, 2012, The Day After Tomorrow, and now the year’s second taken on the D.C. Under Fire premise, White House Down.  Now I won’t deny that a few of his films are pretty entertaining (Independence Day, The Patriot), but that doesn’t mean that they’re not terrible movies.  Emmerich’s productions aren’t so much films as they are vessels for CGI-driven Disaster Porn, which would almost be forgivable if it were for the fact that it’s so often underscored by the man’s god-awful writing.  In any case, as you can tell I wasn’t exactly eager to subject myself to Emmerich’s latest attempts to enact his unexplained vendetta against our nation’s capitol structures.  In the end though, it was probably that very prejudice that made me so surprised at how little I hated the film.  It’s filled to the brim with action cliches and features one of the worst endings of I’ve seen in some time, but between the chemistry of the two leads and the surprisingly decent script, White House Down is by far the least terrible movie Roland Emmerich has made in over a decade.

While on a tour of the White House with his young daughter, a Capitol policeman springs into action to save his child and protect the president from a heavily armed group of paramilitary invaders.

I’m beginning to wonder if some memo went around to producers this year declaring that all action movies now have to be over two hours long.  Maybe producers

think that with ticket prices rising, moviegoers expect more time in the theater per admission price. Then again, if that were the case, Cloud Atlas would have been a slam dunk at the Box Office.  When it comes to run time, less really is more in some cases, and White House Down is no exception.  The pace stays surprisingly strong for the majority of the movie but starts to get weighed down with every added layer of villainous plotting that gets added into the mix.  Cap that all off with a completely laughable climactic scene involving Tatum’s daughter and a Scooby-Doo worthy ending and it’s hard to come away with too much positive to say about the movie’s plot.

While a six might not seem like very high praise, it’s absolutely glowing compared to what I thought I’d be seeing from an Emmerich movie.  Looking at the IMDb

page after the show, however, I realized that it wasn’t so surprising after all seeing as Emmerich himself didn’t write the script.  As a result, the usual lame comic relief the director usually throws into his movies are kept to a bearable minimum.  Instead of using idiotic characters for cheap laughs, the script relies on the talents of the cast to make the humor work.  There’s still a few lame lines here and there that remind us who’s in the director’s chair (“Get your hands off of my Jordans!”), the dialogue on a whole is nowhere near as annoying as I expected it to be.

When it comes to character development, things are still a bit shaky.  Action cliches are abound, from the father fighting to regain the affections of his child to the villain who managed to keep his high-ranking job despite 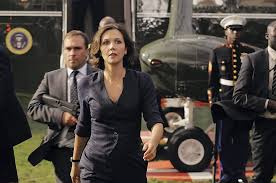 having an obvious reason to betray his country, but that’s neither surprising nor damning in a movie like this.  The real issue comes in the film’s curious attempt to push an agenda that is neither clear nor effective.  A few of the points it brings up are fairly valid observations (The best way to counteract violence is to remove incentives for violence like poverty and hunger), but the majority of the themes the movie introduces are much more ambitious and ultimately much less compelling.  The bottom line is that nobody will go to this movie expecting to hear a political message, so they won’t really know what do with one when they’re presented with it.

Script and special effects aside, the reason this movie works is because of Channing Tatum and Jamie Foxx, with an emphasis on the former.  Tatum has come a 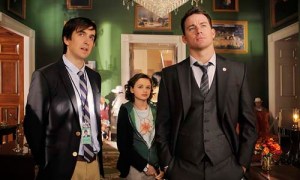 long way in the past two years or so, and that he can carry a movie like this on his shoulders shows that he’s not going anywhere any time soon.  It’s refreshing to see someone who can pull off humor without playing it goofy or idiotic, and Tatum seems to have nailed it on the same level as Will Smith did in his hay day.  Opposite of Tatum, Jamie Foxx still more than holds his own despite the fact that it’s impossible to take him seriously as the President of the United States (which, by the way, Foxx is now 46 years old.  Mind Blown?).

In terms of destruction, Emmerich sort of jumped the shark with 2012.  After all, once you’ve basically destroyed the entire earth bit by bit, anything less than that is going to feel a little tame.  Despite the fact that

Emmerich is limiting his demolition to one city this time around, it’s hard not to admit that it’s pretty impressive.  One of the biggest flaws in Olympus Has Fallen earlier this year was its god-awful special effects, and that’s one area that White House Down has a major advantage in.  Still, what makes the movie’s action actually entertaining isn’t the destruction of mortar and pestle but the pursuit our two heroes lead around the White House grounds.  Added to all of this is the fact that we periodically switch to the point of view of supporting characters, reminding us of how crazy it would be if were we to see these events taking place in front of us in real life.  Watching audiences watch the President firing a rocket launcher at the bad guys is almost more fun than watching the chase itself.

+ Tatum and Foxx have some really entertaining chemistry

– The ending is pretty spectacularly lame and drawn out

4 Responses to White House Down: All Hail President Django