Scorsese Spotlight: The Last Temptation of Christ (The Cinematic Frontier)

Posted on July 28, 2013 by r361n4
Louis from The Cinematic Frontier was so kind as to submit review for both this film and Hugo for my ongoing Scorsese Spotlight segment, and I was so unkind as to forget to post them after he had sent them to be.  I extend my apologies to Louis but I suppose late is at least better than never.  Here is his review for Martin Scorsese’s foray into overt Christianity; The Last Temptation of Christ. 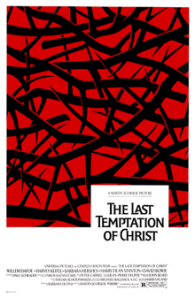 The mythical figure known as Jesus Christ is no stranger to cinema.  There have been many Biblical films made, and Jesus has been portrayed by many different actors (Jeffrey Hunter, Max Von Sydow, and John Hurt; just to name a few).  While each actor tries to bring something to the character, whatever is brought is mostly very subtle; film after film it’s pretty much the same divine character who always acts so much more divine than human.  Perhaps that’s what drew me to Martin Scorsese’s 1988 film The Last Temptation of Christ.  Here was a chance to see a different portrayal of Jesus, one that stands apart from all the rest.

Based on the novel by Nikos Kazantzakis, Scorsese’s film centers on the carpenter Jesus of Nazareth as he begins his ministry despite being filled with fear, lust, reluctance, 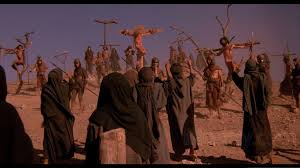 depression, and self-doubt.  Many of the events covered in other Jesus films are present in this one, but there are alterations to them (in part due to Kazantzakis’ novel).  What makes this Jesus film stand out from others is that the Jesus in this film actually behaves like a human and not just some divine figure.  He constantly doubts himself and is unsure of his path; he isn’t sure if he really is God’s son or not.  Willem Dafoe’s excellent portrayal of Jesus feels more honest, realistic, perhaps even authentic (although we don’t know if any of the Gospel stories actually happened; the Bible is definitely not a reliable historical text).

Indeed, the central thesis of Kazantzakis’ novel was that Jesus was still subject to fear, reluctance, depression, lust, and doubt while being free from sin.  Jesus struggled to do

God’s will, facing and conquering all of man’s weaknesses without giving in to temptations of the flesh.  If Jesus had succumbed to any temptation, including saving himself from the cross, then his life would’ve been nowhere near as significant as it turned out to be.  It is this argument that Paul Schrader successfully adapts into his screenplay (with some uncredited re-writes by Scorsese and Jay Cocks).  That is why the last temptation is so important.  A young girl (claiming to be a guardian angel) tells Jesus that, although he’s God’s son, he is not the Messiah and that God wants him to be happy.  She helps him off

the cross and he goes on to live a peaceful life, marrying and having many children.  When he is on his deathbed, Judas reveals to him that the young girl is actually Satan.  It is then that Jesus returns to the site of the crucifixion, begging God to let him be his son and let him fulfill his purpose.  Jesus has conquered the final temptation, returning to the cross where he hangs until his death.  I find it amusing that so many Christians objected to the last temptation sequence before the film was even released; I would’ve figured they would find their faith re-affirmed by it (no matter how misplaced I think their faith is).

As an atheist, even I have to admit that this is a powerful film despite it going through some interesting production delays.  Scorsese was originally supposed to shoot it in Israel

in 1983 when the project was at Paramount.  Aidan Quinn was supposed to play Jesus, Sting was set to play Pontius Pilate, and Vanity had been cast as Mary Magdalene.  It was a combination of a ballooning budget and numerous protest letters that led to Paramount canceling the film.  After the success of After Hours and The Color of Money, Universal became interested in making the film.  Scorsese agreed to make the film at a lower budget and shoot it in Morocco, as well as direct a more commercial film for them later on (1991’s Cape Fear).  Willem Dafoe was cast as Jesus, Harvey Keitel as Judas, Barbara Hershey as Mary Magdalene, and David Bowie as Pontius Pilate.

Despite a short shooting schedule and a low budget, Scorsese delivered an excellent film.  The cast was simply terrific.  The scene that lingered with me the most after seeing the 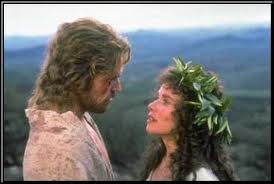 film on the big screen several years ago was the one where Jesus asks Judas to betray him so that he can be crucified.  Jesus believes that Judas’ “betrayal” will allow him to fulfill God’s purpose for him.  In virtually every Jesus movie or TV mini-series, Judas is portrayed as a villain, but in this particular film he’s actually kind of the hero; without Judas’ betrayal, Jesus can’t die on the cross and bring salvation to mankind.  Willem Dafoe and Harvey Keitel were terrific together (I don’t know why people attack Keitel’s performance; I thought he was fine here).  Barbara Hershey delivers an interesting performance as Mary Magdalene; her portrayal is probably the closest to how that character actually lived (assuming she really did exist).

I could go on and on about this film, but somewhere along the line this would stop being a movie review and it would turn into a religious and philosophical debate.  If I could only recommend just one Jesus film, then Martin Scorsese’s The Last Temptation of Christ would be that film.

Thanks again to Louis, who’s review of Hugo will soon be posted.  I highly recommend you check out his site over at http://cinematicfrontier.wordpress.com and follow him on Twitter at @filmscorehunter.

I'm a student at the University of Washington Majoring Business. I've always loved movies and my goal is to work on the financial side of the film industry. Until then though, I figure I'll spare my friends from my opinions and shout them from a digital mountaintop for anyone who's interested. After all, if a tree falls in a forest and nobody blogs about it, does it really happen?
View all posts by r361n4 →
This entry was posted in Guest Reviews, Reviews and tagged Actors who have Played Jesus Christ, martin scorsese review series, Rorschach Movies, rorschach reviews, The Cinematic Frontier Movie Blog, The Last Temptation of Christ Review. Bookmark the permalink.

3 Responses to Scorsese Spotlight: The Last Temptation of Christ (The Cinematic Frontier)