Posted on May 23, 2013 by r361n4
I’ve had quite a few distractions lately but I’m going to finally try to get back on track with my Scorsese Spotlight series.  So far we’ve had nine different reviews from eight different bloggers, and more are coming in.  Today’s entry comes from Claire over at My Reel POV.  Claire’s fondness for review subtitles is something we share, but aside from that she’s also a very talented and funny writer who you should follow if you aren’t already.  Here is Claire’s review of Scorsese’s Howard Hughes biopic; The Aviator. 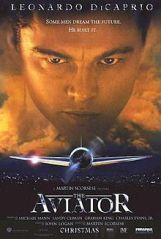 I don’t think I knew what I was letting myself in for when I settled down to watch The Aviator. It really can be classed as an epic at just under three hours long, but the story itself is one that really captured my imagination. This biopic stars Leonardo DiCaprio as the famous Howard Hughes, film maker, philanthropist, aerospace engineer and aviator among other things, following him through the early years of his prolific and controversial career. The story spans around 20 years starting in the late 1920’s when Hughes was setting the record for the most expensive film ever made – ‘Hells Angels’. Scorsese focuses on all aspects of his life through these years, including his love affairs, film making, feats of aerospace engineering and perhaps most significantly his mental health.

The first part of The Aviator is pretty exciting and fast paced. Whilst the scenes revolving the making of the Hells Angels picture grab your attention, the best bit for me is the 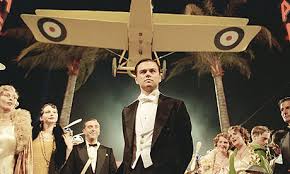 development between Hughes and Katharine Hepburn – played by Cate Blanchett in one of her best roles to date. Blanchett oozes charisma and I loved the relationship her and DiCaprio pull off, pretty moving stuff! Perhaps a little too animated at first but once you learn about Hepburn’s character she softens just as Hughes does. These early stages of the film also introduce key characters, John C. Reilly as Noah Dietrich – Hughes’ right hand business adviser Alec Baldwin playing Juan Trippe, airline entrepreneur and founder of Pan American World Airways and Kate Beckinsale as actress Ava Gardner.

Whilst Hughes was known for his Hollywood career and wealth, he was little known other 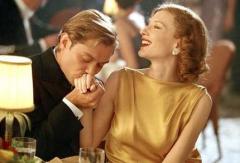 than for his relationship with Katharine Hepburn, until he beat a world record – flying around the world in 3 days. This rocketed him to fame in a way that was not highlighted as well as it could have been in the film. Scorsese looks more closely at Hughes’ personal relationships than that of his public one. Quick flashes of newspaper headings and photographs depict his relative fame, just as it would to the public I suppose. Now I think about it, that makes sense! Clever man.

Hughes’ passion for speed propels him to spend millions on his air-crafts as well as film making, his perfectionism is heightened by his overwhelming and seemingly worsening 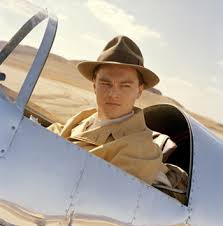 mental health. Suffering from OCD, hypochondria, anxiety, paranoia as well as being partly deaf all takes its toll and his suffocating need to be in control ruins all of his relationships eventually (despite having many of them!). DiCaprio does a brilliant performance, and manages to develop the role across the 20 year time span quite believably. Apart from a thrilling plane crash, the film slows a little after Hughes’ near fatal accident. Upon recovery he becomes a hermit, sitting in a germ free zone watching his films for months on end. There are some fantastic shots though showing the torment Hughes is going through, projecting images of his own obsessions on him while he has a mental breakdown in the dark room – some great directing which has really stuck in my head since.

Luckily, the film picks up again when Hughes is forced to a public hearing in order to defend himself from investigations made by the government, influenced by his rival Trippe 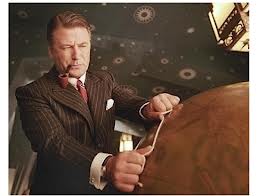 (Baldwin!). Here he captures the interest of the public again by sticking it to the man and going ahead with his record breaking Hercules, the biggest plane to ever fly. I was really routing for him at this point and despite the film having been on for 2 and a half hours already I wasn’t ready for it to end. There is a climactic sequence which would have been a good point to have the credits roll, but Scorsese pulls the hero, and audience, back to reality and ends on a dark note. Much to my enjoyment! It left me wondering whether Scorsese was paying tribute to a great man living the American Dream? Or something much darker about the ‘human condition’. That’s reading into it too much I suppose, as a film, it’s pretty damn good!

Unfortunately due to the vast time line and Hughes’ crazy life, some story lines seem rushed and under developed. Beckinsale’s character was a near miss for me, and cameo’s from Jude Law, Gwen Stefani and Adam Scott didn’t bring much to the table. The real talent shone through Blanchett and DiCaprio in this one. 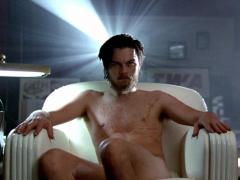 hours 50 minute running time. There are some interesting things that got missed out though, such as Hughes’ generosity. At age 19 he declared in his will that should he die his money would go into setting up a medical foundation. Hughes also paid all expenses and medical bills for his good friend Gene Tierney’s severely disabled daughter, despite all of his romantic advances being rebuffed. On the flip side, Hughes killed a man due to dangerous and reckless driving, only to have all witnesses change their story and charges against him dropped. A powerful and incredibly interesting man!

Scorsese managed to piece together a lot of events without the film feeling too fragmented and fast paced, giving a great insight into the character. A brilliant film for those interested in a biopic of this nature, but perhaps a little long winded for those seeking pure entertainment.

I'm a student at the University of Washington Majoring Business. I've always loved movies and my goal is to work on the financial side of the film industry. Until then though, I figure I'll spare my friends from my opinions and shout them from a digital mountaintop for anyone who's interested. After all, if a tree falls in a forest and nobody blogs about it, does it really happen?
View all posts by r361n4 →
This entry was posted in Drama, Guest Reviews, Reviews and tagged Alec Baldwin The Aviator, Cate Blanchett THe Aviator, Kate Beckinsale The Aviator, Leonardo DiCaprio nude The Aviator, Martin Scorsese The Aviator, The Aviator. Bookmark the permalink.

3 Responses to Scorsese Spotlight: The Aviator (My Reel POV)